Pacific Electric freight locomotive no. 1619 is captured in this circa-1930 image featuring its assigned crew, somewhere on the Northern District. In this series of images, 1619 and crew are pulling a long consist of hopper cars (lead by PE 6063), possibly carrying rock from quarries. The gentleman standing with the light-colored hat is Lynwood Abner Toothaker, who worked on the PE from 1912-1946. His grandson Thomas Pollock contributed this image to the PERYHS site. 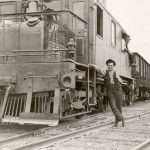