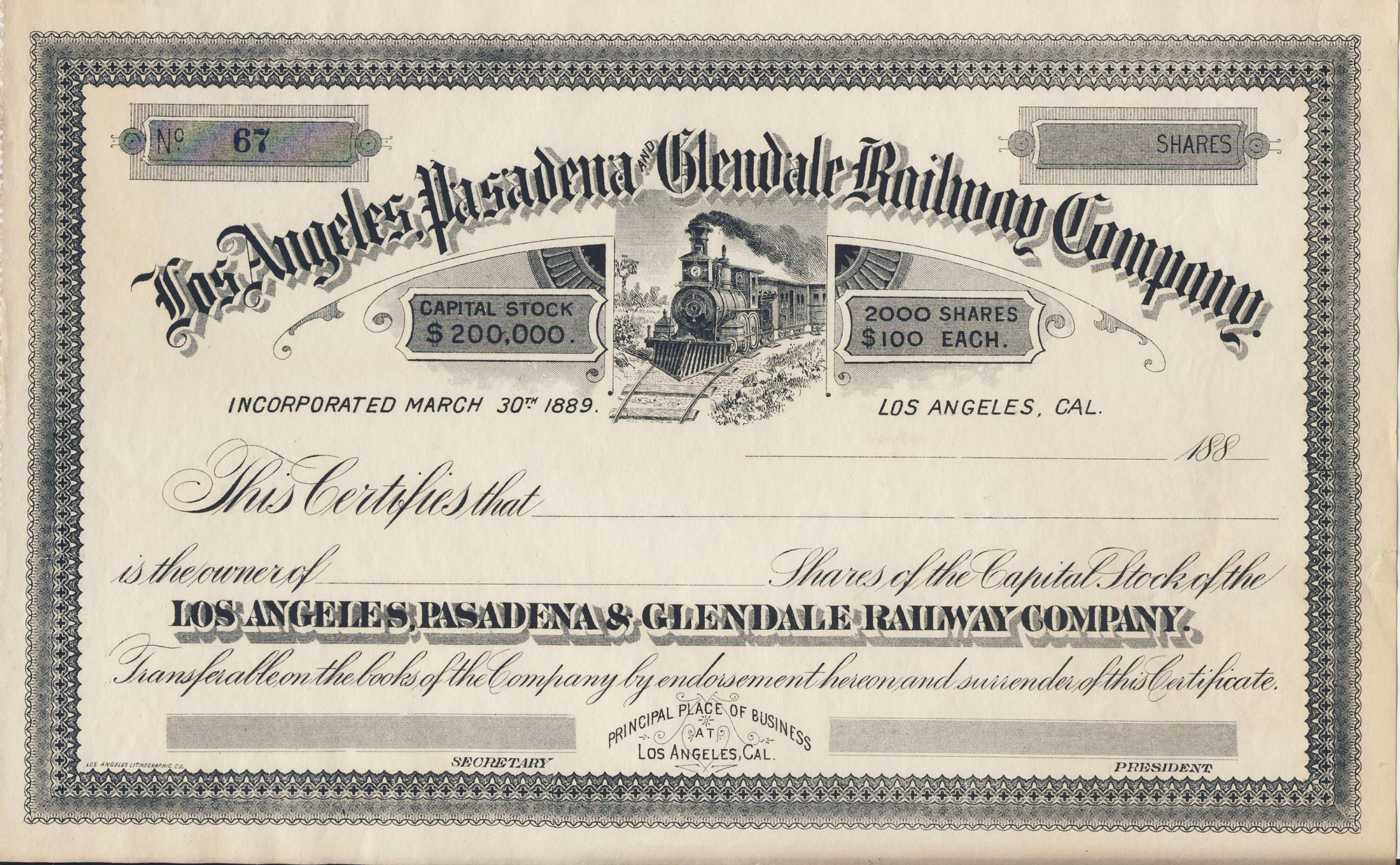 An unissued stock certificate from the Los Angeles, Pasadena and Glendale Railway Company. Donated to the Mount Lowe Preservation Society by Rick Wright.

The Los Angeles & Glendale Railroad Company.—This company was incorporated under the general laws of California January 13, 1887, for the purpose of constructing a railroad from Los Angeles to Glendale, Calif. Its charter was amended October 8, 1888, under the name of the Los Angeles & Glendale Railway Company. It built 6.50 miles of road through John Cross as contractor. The cost to him is not known, but the company voted him $75,000 par value in stock. Additional stock to the par value of $25,000 was subscribed for, and at least 10 per cent of par value thereof was paid into the corporation. All the stock issued was later reacquired and issued to the Los Angeles, Pasadena & Glendale Railway Company in exchange for $100,000 par value of the stock of that company.

The line was opened for operation in March, 1888, but no accounts are in existence from which the gross and net earnings can be determined.

The Los Angeles, Pasadena & Glendale Railway Company.—This company was incorporated March 30, 1889, under the general laws of California. It constructed 6.4 miles of standard-gauge railroad between Los Angeles and Pasadena, and 1.8 miles of narrow-gauge line between Glendale and Verdugo Park. A third rail was also laid on a part of the standard-gauge line. The cost of construction can not be satisfactorily ascertained. The company issued $100,000 par value of stock in exchange for stock of the Los Angeles & Glendale Railway Company, and $100,000 additional for $22,000 cash and for organization expenses the amount of which does not appear. It issued also $200,000 par value of bonds […] of this between road, equipment, general expenditures, and other purposes has been already set out in the history of the Terminal Company. The remainder represents the par […] total operating loss of $8,187.87.

The Los Angeles & Pasadena Railway Company, and the Los Angeles & Raymond Railway Company.—The first of these companies was incorporated June 27, 1884, and the second April 14, 1887, both under the general laws of California, Neither constructed any mileage and neither apparently issued any stock or bonds. Aside from the receipts referred to and quoted in the history of the Terminal Company there is no evidence in any records that have been found of expenditures by or for either company for property.

The Pasadena Railway Company.—This company was incorporated March 3, 1887, under the general laws of California. It constructed a line from Pasadena to Altadena, 7.21 miles long. The securities which it issued, the cost of constructing its line, the gross and net earnings resulting from operation, and the other financial facts