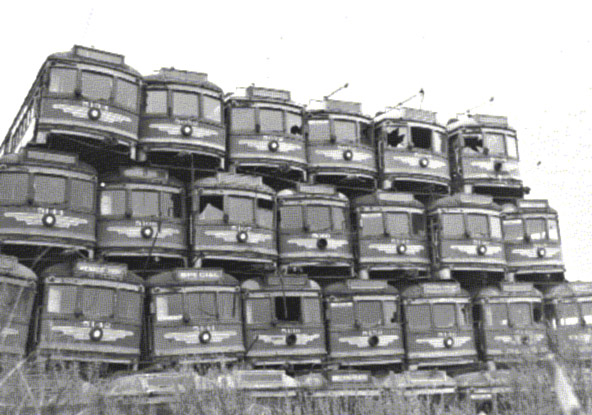 National Metals & Steel was never a pleasant place to visit for rail fans. Starting about 1955, steam locomotives, mostly Southern Pacific, starting arriving at on Terminal Island for scrapping by the hundreds. Dieselization on Americans railroads (mostly General Motors diesels) were taking a heavy toll on the nation’s dwindling population of active steam locomotives.

Dieselization was also taking its toll on Americas population of active streetcars. Dieselization of Americas Public Transit systems came on fast and heavy in the late 1940s and early 1950s. General Motors diesel buses, by far, took the biggest share of new bus orders, pushing aside such other bus builders as WHITE, BRILL, MACK, SOUTHERN, FORD TRANSIT, and CHECKER just to name a few.

To be fair, GM did build the “better mouse trap” as buses go. But the mass replacement of streetcars across this nation was an ill conceived “Proclamation of Progress.” The misuse of diesel buses by the likes of National City Lines , and Jessie Haugh, did more to destroy America’s good will towards public transit, than the mass production of the automobile itself.

Rail transit here in Los Angeles was nearly bombed out of existence between 1950 and 1960.
In this sad photo taken in early 1956, the once beautiful Pacific Electric no. 5144 (second row down, extreme left) has come to the end of its service life, at least 20 years to soon. Just 5 short years before (1949-50) this horrible photo, 5144 and 130 of its sister Hollywood cars had gone through a multi-thousand per car upgrade. Included in the upgrade was all new wiring, upholstery where needed, and a beautiful new top-to-bottom paint job. And for what?

In early 1951, thanks to the California Division of Highways (now CalTrans), PE’s Northern District was scuttled in favor of freeway construction. Northern District Hollywood cars nos. 5050 to 5099 were made surplus before their new paint was dry. Western District car no. 5144 enjoyed just 5 short years of service after its major overhaul…with decades of service life left in its car body, 5144 and about 100 sister Hollywood cars were sent to scrap prematurely, in one of the most disgraceful acts of wasteful vandalism ever witnessed in the transit industry.

The DIESEL had done its job, but not for the betterment of this country, but for the greed of those people and corporations that misused the Diesel bus.