If you look closely at the window to the left of the motorman, the special effects people have drawn cracks in the window with some type of light-colored paint to make it look like it was damaged. Ralph Cantos Collection.

Its no secret that from about 1910 onward, Southern California’s budding movie industry was very fond of LA’s streetcars of both the Pacific Electric and Los Angeles Railways. PE’s Hollywood cars and LARy’s “Standards” were known the world over from their countless appearances on the big screen.

In this photo from taken from the 1930 2-reel Laurel & Hardy comedy “Hog Wild,” yet another Ford Model T is done in by the special effects department of Hal Roach Studios. From the research that I have done, I place the location of the “accident” on Estrella Avenue just north of 23rd Street in the West Adams District.

Scroll ahead to about 17:40 to see the scene depicted above in the still image. 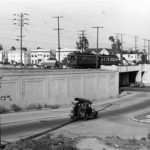