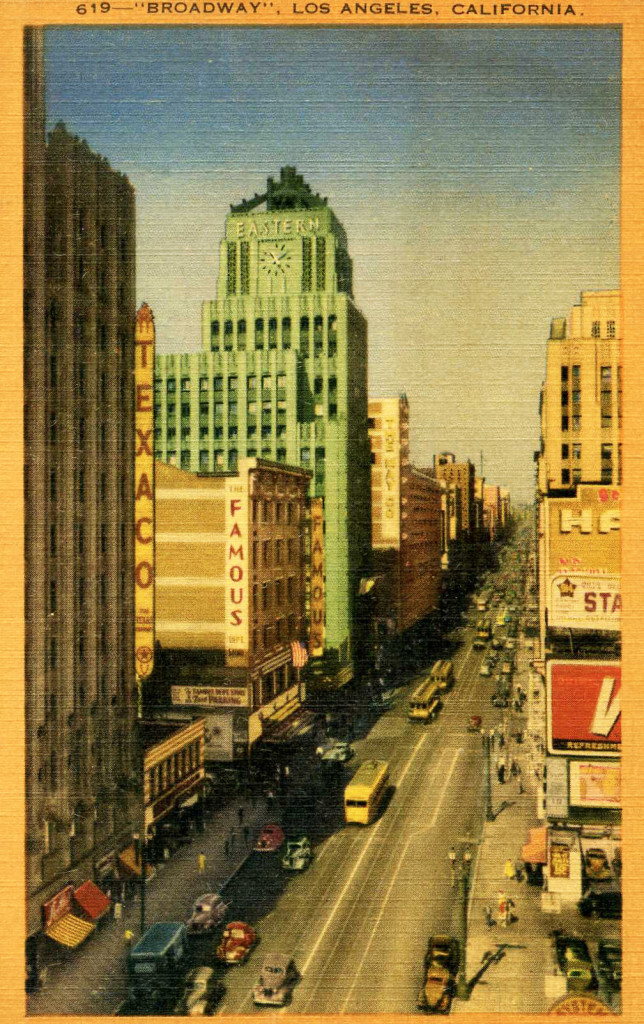 Several great cities in North America, 27 of them to be exact, had one thing in common: state of the art city rail transportation – the PCC streetcar!

Los Angeles was the 4th city in America to join the “PCC PARADE OF PROGRESS” in March 1937. Always in the forefront of street railways latest developments, the Los Angeles Railway along with the City was very proud to be host to the “latest thing on rails.” What better way to show off this new asset in urban transit, but to showcase a PCC on the main boulevard of this great city? From 1937 until the outbreak of World War II, many post cards, both black & white and color, always included a Los Angeles Railway PCC gliding up or down Broadway.

In this 1938 post card, a new LARY PCC rolls south bound on Broadway at 9th Street against the back drop of one of the most beautiful buildings in LA. The Eastern Columbia Department Store. Any person listening to a radio in LA during the 1940s-50s and early 60s will recall with fondness the jingle “Eastern Columbia, Broadway at Ninth.” That slogan was right up there with “Coast Federal Savings, 9th and Hill on the ground floor.”

LARY PCCs would be a part of the LA cityscape for 35 years. In later years, color postcards featured LATL P-3 all-electrics, showing the world that LA was still a high water mark in city transportation. All of LA’s world class city rail transit came to an end, first in 1955 when MCL scuttled the Glendale — Burbank Line and its revolutionary MU PCCs — and later in 1963 with the premature retirement of the finest street railway system in America and its PCCs. From that sad day until the opening of the METRO BLUE LINE, LA was just another dusty hick town with hordes of buses providing inferior transportation to a traffic-choked city.