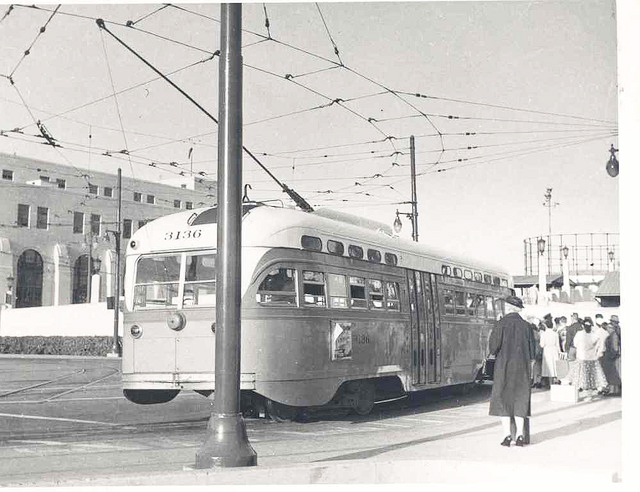 The City Of Los Angeles and its transit systems have had some “special” transportation events, some big, some small, that went virtually unnoticed with little celebration or fanfare.

One such special event took place for a period of about five years each Saturday and Sunday afternoon during the summer months. The “event” would begin at Georgia Street car house when a lone P-3 all-electric would leave the yard with SPECIAL displayed on its head sign. The P-3, in this case, Los Angeles Transit Lines car no. 3136, would make its way to Broadway, head north to 1st Street, turn east to Main Street and that is where something special happened: the P-3 would turn north on Main Street and follow the route of the F line to Union Station Loop.

The reason for this special movement was to provide a “deluxe” train connection for passengers that had just arrived at LAUPT on the Santa Fe train from San Diego. Passengers using the LATL’s F line to get to Downtown came down the streetcar “cortège” and instead of finding an H-3 waiting for them, they discovered the latest in city rail transportation, a near-new P-3 All Electric. On the head sign was displayed P Pico and GEORGIA ONLY. Passengers who just needed to get to 7th & Broadway hopped or hobbled aboard the 3136 , and in no time were at 7th & Broadway, in smooth, silent comfort, to the center of LATL’s vast rail network.

From there, passengers could reach just about any destination by transferring to other rail and bus lines.

This wonderful convenience all came to an end on May 22, 1955 when LATL pulled the plug on the F line along with rail lines 5-7-8-and 9. It was a real nice treat for connecting train passengers while it lasted.