LATL R, S & J Lines: The Charm of Downtown LA Died With Them 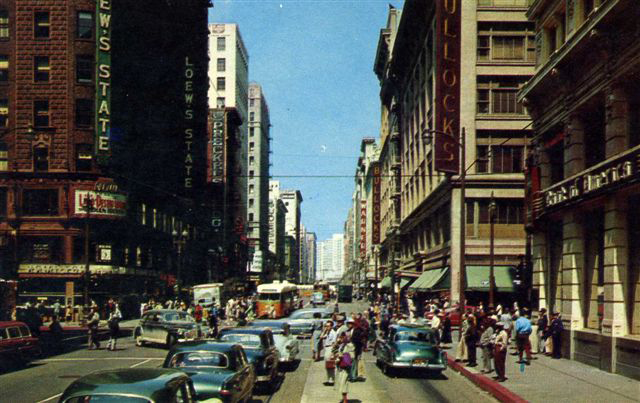 Many post-World War II postcards showing vibrant downtown business districts across America had a tendency to include streetcars. What would any great city be without streetcars?

The high point of most US city rail transit systems was the modern PCC. Los Angeles was no exception. This postcard from about 1956 looking west on 7th Street at Broadway shows Los Angeles Transit Lines PCC car lines R-J and the H-4 operated S line doing what they did best — moving people.

What really makes this particular post card interesting to me is the 1941 Buick Limited 90F limo making the right turn from Broadway to 7th St. By 1956, prewar cars were becoming rare and to catch a low production ’41 Buick Limo in this moment in time is really remarkable. By the looks of the Buick, its days of “high society and glory” are long gone. Buick produced limousines in direct competition with Cadillac. The last factory Buick limo left the Flint, Michigan, assembly line in February 1942. After the War, GM told the Buick Motor Davison “no more limos,” and that was that!

When the last of LA’s streetcar lines were abandoned on March 31, 1963, the charm of Downtown died with the last 5 car lines. Gone was the friendly sounds of streetcar bells resonating off the tall Downtown buildings — replaced by the loud, obnoxious, irritating standard BEEP BEEP horns used on most city transit buses at the time.

After 1963, only one major US city in the West where you could still enjoy the sounds of PCC bells was San Francisco. The decision by “Muni” (San Francisco Municipal Railway) to retain streetcars on Market Street was the best thing to happen to Downtown San Francisco.

And as the late Paul Harvey would say, “and now, you know the rest of the story.” May he and LA’s long-gone streetcars rest in peace…