The Very Happy Boom, Before the Sad Bust 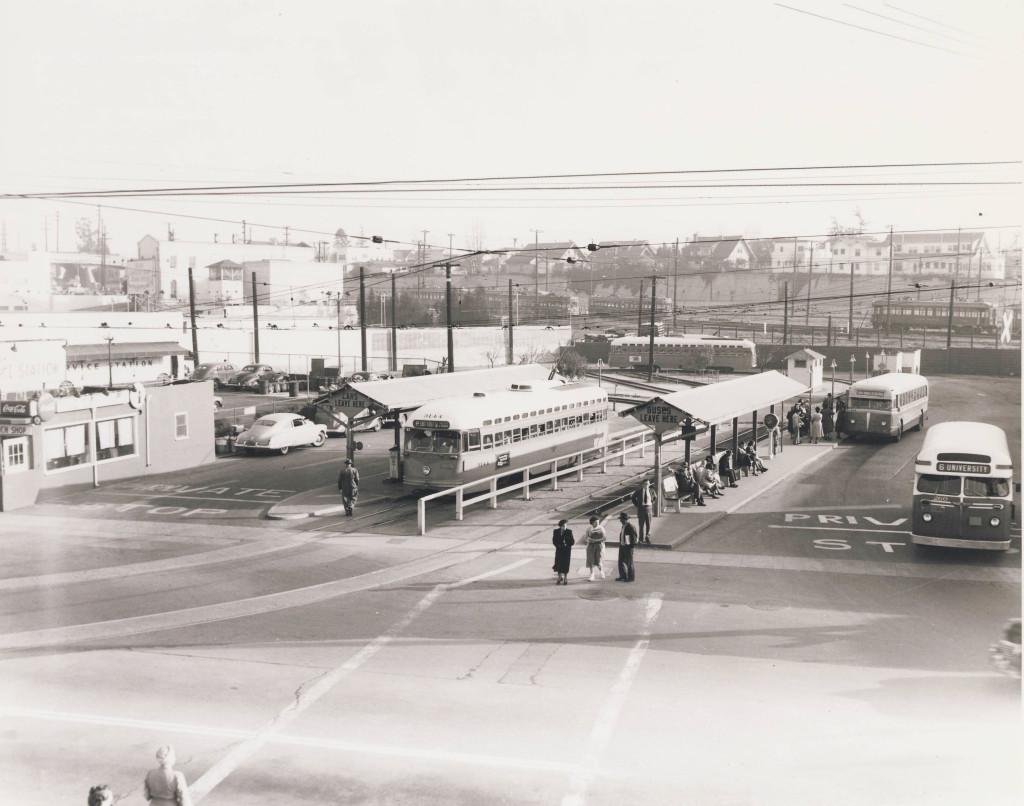 This photo, recently discovered by traction historian Michael Patris, is remarkable to say the least. It was taken in November of 1948 at the Los Angeles Transit Line’s Rimpau loop.

Brand new PCC no. 3144 is loading passengers, for a fast, smooth, silent trip to Downtown Los Angeles. A new Bay Cities Bus Lines Checker “Transit” bus on line #6 leaves the loop. Also loading in the bus portion of the loop is Santa Monica Municipal Bus Lines no. 614, a White Motors model 798 of 1947 vintage working the #7 West Pico Blvd-Santa Monica Line. In the far back ground above it all is Pacific Electric’s wonderful old Vineyard Junction and storage yard, with 1000s and Hollywood cars awaiting their call to duty. Los Angeles rail fans could not be happier.

National City Lines, parent company to the LATL, had just purchased 40 state of the art “all-electric” PCCs for exclusive use on the heavily patronized Pico Blvd-East First St Line. It was well known in the American transit industry that National City Lines and LATL had no love for ANYTHING that operated on steel rails. It therefore came as quite a shock when the beautiful new, extra wide PCCs arrived for service in LA.

This amazing historic photo could have only been taken between November 1948 and September of 1950. In just 22 months, all the happiness and the optimistic future of rail transportation in LA would be shattered on Sept. 17, 1950, with the abandonment of the Venice Short Line, the first of many to come.

The Pacific Electric was under enormous pressure from the City of Los Angeles and the State Railroad Commission to modernize the VSL. The back bone of the VSL were the 31 handsome wooden 950s dating back to 1907. Also serving the line were two 3-car trains of 1000s dating to 1913 , also of wood construction. The “babies” of the VSL were a handful of Hollywood cars needed to protect the demanding service of the line.

LA newspapers posted photos and editorials blasting the PE over the use of the 950s and the 1000s. Both classes had been ordered off the streets of LA in 1938. The trusty cars had been saved from the scrap pile by the outbreak of World War II. Had it not been for the service of these 88 cars during the war years, it would be safe to say that LA transit riders would have “been up the proverbial creek without a paddle.”

But by 1948, the city had “looked the other way” long enough, and demanded the PE take action on the removal of the ancient cars, to protect the modern image of the City.

By 1948, plans for the future Santa Monica Freeway were firmly in place, with no provisions for rail transit in a center median. Pacific Electric management, already aware of what the Pasadena Parkway (110 Freeway) had done to passenger levels on its Pasadena rail lines eight years earlier, thought long and hard as to the future of the VSL. In short, it would have cost the PE almost 3 million dollars to modernize the VSL as a rail line, or “bustitute” the line for a scant 1 million dollars. The PE would also recoup a large portion of that expense from the scrap value of the line. It was a “no brainer”!

Buses took over on September 17, 1950, much to the dismay of passengers who seemed to love big interurbans. Small cramped gasoline powered White 798s with their smelly, underfloor 12-cylinder engines were certainly no improvement to the quality of the service on the VSL. But in all fairness, the PE really had no choice. It was the “beginning of the end” for rail transit in LA. It was a relentless, unstoppable march that would take 13 years to complete.

And so this timeless photo would all change drastically in less then two years. Only the large houses on the south side of Venice Boulevard and the West Boulevard bridge would survive into the 21 Century. EVERYTHING else in this beautiful scene — Vineyard Junction and Sub-Station, the Sears – Pico Department Store, and Rimpau Loop will all be swept away by the passage of time.

A special note regarding the Bay Cities Checker Transit bus: Very few of these buses were built between 1948 and 1949. All were gasoline powered, and featured a unique forward-facing “standee window” above the destination sign. The eight Bay Cities unites were the only ones to operate in Southern California, and very few, if any, have been preserved.