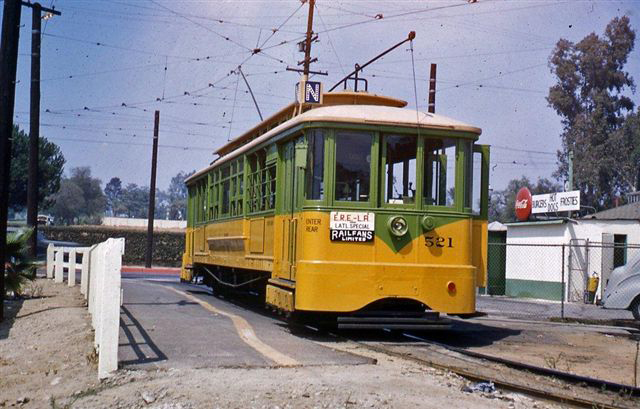 Los Angeles Transit Lines (ex-Los Angeles Railway) car no. 521 poses for the camera at the east end of the R line (Brannick Loop) during a Fan Trip.

The #521 was one of three 500s that was saved from “The Pile” at Terminal Island. The #521 went to Seashore Trolley Museum, where she remains to this day (click here to read her biography). The #525 was purchased by the SC-ERHA and moved to Travel Town, and then, years later, moved out to OERM. Car #536 was donated to the children of Los Angeles and placed in Travel Town’s public area alongside PE #1001, which was later moved to Perris at the same time as the #525. HOWEVER, after many years of display, a rather large eucalyptus Tree near the #536 was blown over during one of LA’s many Santa Ana wind storms and fell right across the the #536, destroying the old girl . OERM was allowed to salvage the trucks and other goodies from the #536. A sad ending of a long life.