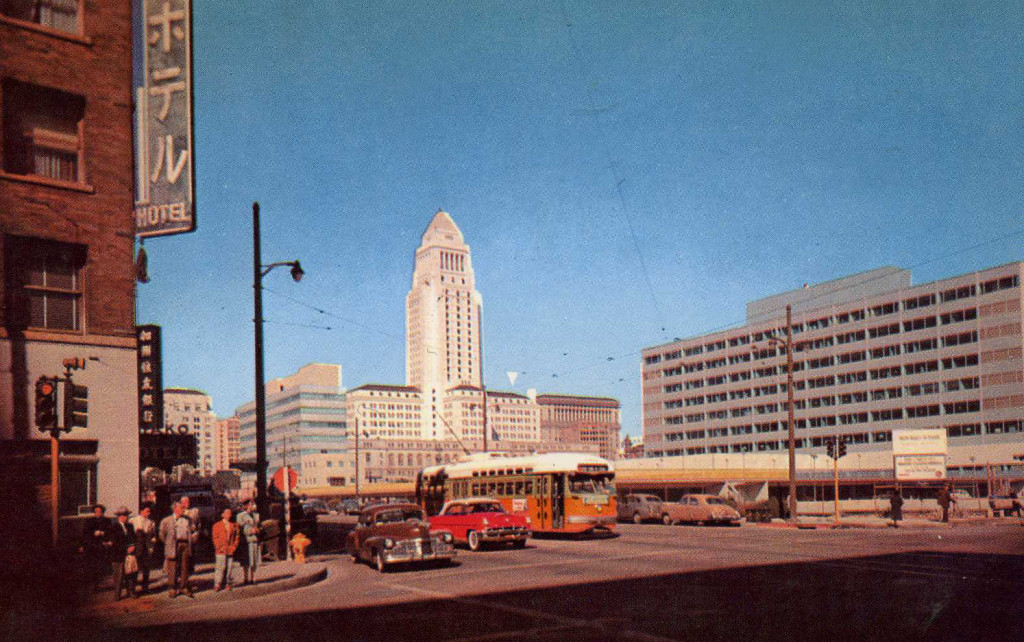 From 1953 until 1958, and for endless decades of reruns, Los Angeles City Hall was know to millions of people around the world as “The Daily Planet Building” in the fictional city of Metropolis.

Along with the Empire State Building, the Chrysler Building, and the US Capitol Building in Washington DC, LA City Hall is known the world over.

The Adventures of Superman was just one of many appearances LA City Hall has made on both the small and large screens. It was blown to pieces in the 1953 movie War Of The Worlds.

What better way to show off this iconic building in a tourist postcard then to have a “state of the art,” world-class transit vehicle to pose front and center in the classic photographic composition?

Taken sometime around 1956, an unidentified LATL P-3 all-electric waits for the green light and its chance to accelerate away at a pace that will leave most of the autos in this setting, “in the dust.” Unlike the LARY-ordered prewar PCCs that were “stripped to the bone” of available accessories such as rear marker lights, heaters, window shades, and crank window lifts, the LATL ordered P-3s were deluxe in every way. They were “fully loaded.”

And so just moments after this photo was taken, the P-3 will dash off to the East end of the P-line and into history. Who would ever have believed at the time, that just 7 years later, an inferior, non-descript GM bus will dominate this very same location, and these Cadillacs of city rail transit will be sold off to a fourth-world country?