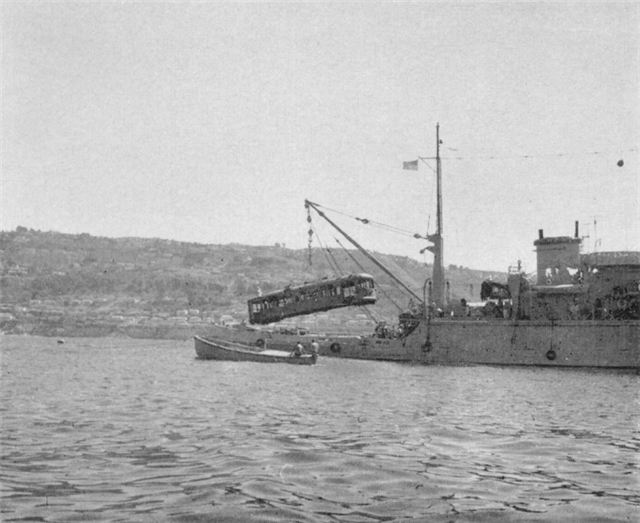 A former Los Angeles Transit Lines streetcar is craned into position before being placed into the waters off Redondo Beach as an artificial reef in 1956.

After LATL abandoned rail lines 5-7-8-9-& F in the big 1955 abandonment, more then 300 LATL cars (all in mint condition) of the 1200, 1300, and 1500 series and the last remaining standards (500s and 1100s plus the #2501 and #2602) were sold for scrap to National Metals and Steel in early 1956. National Metals later either sold or donated about 25 1500s for use as “fish hotels”. The K-4 1500’s were chosen because they were not of heavy steel construction like their H-4 cozens, but rather mostly wood bodies built on a steel frame. The K-4 bodies were not as valuable as the all steel H-4’s. Only the roofs of the H-4’s were wood. The car bodies were transported by NAVY salvage ship to the waters off Redondo Beach without ceremony and DUMPED! A few years later on an 1958 episode of “SEA HUNT” Lloyd Bridges swam with the local fishes in and out of the car bodies. After being in the sea water for more then 2 years, the 1500’s still looked good. Their wood slat walk over seats , less brass handles , looked ready for rush hour passengers on the W & 9 lines. The local “fish passengers” seemed oblivions to the historic nature of their surroundings. On the East Coast, the local fish were treated to more “substation” hotel accommodations. The fish there , were treated to retired all steel New York City RED BIRD subway cars. The body of LATL #2501 was later rescued from National Metals, and moved to OERM. Sadly , the #2602 perished, but its sister #2601, lives on at OERM.