When the first Los Angeles Metropolitan Transit Authority (Many Trolley Abandonments) assumed control of transit operations in the City Of Los Angeles, job number one was to begin planning for the eventual destruction of ANYTHING and EVERYTHING that operated on steel wheels.

The first order of business was to re-number the surviving ex-Pacific Electric Blimps and Hollywood cars from fleet numbers 300-400 and 5100 numbers respectively, into 1500-1700 and 1800 numbers. The plan was to scrap everything numbered below the 2000-class range (which were assigned to GM interurban buses at that time).

The 1444 headed for a different “situation.” It wound up on a miniature golf course at 190th and Figueroa Streets.

The new owners stripped the interior of the 1444 of all seats and sadly, the two bulkheads, all done to make room for a bank of several pinball machines. The removal of the bulkheads severly compromised the structural integrity of the 1444 and her condition began a slow but steady decline.

The golf course closed after about six years of operation. The 1444 had deteriorated to a point of no return. OERM members removed anything of value from the now-hopeless 1444 and what was left of her was “hauled off to the dump” by its owners. The 1444 would join its sisters in trolley heaven.

I took this photo with my little KODAK 620 box camera in 1961. She was still in decent shape, but the coming years would not be kind to the 1444 and her came slowly but surely. 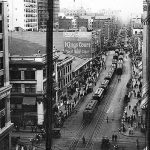