This remarkable photograph taken from high atop the Pacific Electric building looks down on Main Street at 6th. A mix of southbound Los Angeles Railway (LARy) and PE cars stretch as far as the camera can see. Even though both the LARY and PE operated primitive, gasoline-powered buses of marginal size and construction at this time, most if not all important lines were operated by streetcars of the LARY and sizable interurbans of the PE.

What buses there were, usually held down runs on the “outskirts” of the City. Very few, IF ANY, bus lines operated into the Central Business District of Los Angeles.

What railfans there may have been in 1926 must have looked at this photograph with great pride and optimism. All those optimistic railfans looked to the future with great hopes for an everlasting dominance of rail transportation in Los Angeles, if not the entire USA.

But in the coming decades, circumstances and events would alter the hopes and dreams of even the most optimistic proponents of big city rail transportation. Ever-improving automobiles and technical improvements to the motorbus would bring the future of rail transit to the crisis point.

Ten years after this photo was taken, the modern, revolutionary PCC streetcar design would make its debut on the city streets of “big city America.” In the coming three decades, an army of 5000 PCCs would fight a losing battle to the finish with millions of private automobiles and hordes of buses being built by several manufacturers that were “cashing in” on the misguided investment of “flexible” bus routes and ever-expanding highway and freeway construction. This epic battle of rail vs. rubber could be equated with the “Battle of the Alamo.” PCCs slowed, but could not stop, the onslaught of trolley-to-bus conversions taking place across this country.

By 1956, a photograph taken from the top floors of the PE building would be shocking. Trolley and interurban rail transportation had vanished from Main Street and buses dominated the thoroughfare. Not even the rails remained. PE’s once-vast Southern District struggled for its very existence, with Metropolitan Coach Lines hell-bent on its total destruction.

By 1957, only 5 former LARY car lines remained, and in less than a decade, they too were gone. The battle had been hard fought, but was lost to ignorance and greed. The pleasant memories of streetcars were all that LA commuters could hold on to, until the opening of the Metro Blue line in 1989.

Since then, rail transportation has made a slow but steady return to the landscape of Los Angeles and surrounding suburbs, at a cost of unimaginable hundreds of BILLIONS of dollars to restore what was once a common sight in Los Angeles. As of 2016, half-century-old PCCs still provide nostalgic, dependable transportation in a few select US cities that were smart enough to keep them operating, or restore them back to service. 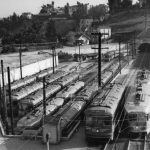