This 1937 Westinghouse full-page ad shows new Los Angeles Railway no. 3007 photographed on 2nd. Avenue between 48th & 54th streets. This section of track did not have any regular streetcar service, so it was an ideal location for photographing various car types as well as movie work and motorman training.

Cars 3001 to 3060 arrived in mid-1937 to great fanfare and civic pride. The LARY PCCs were the 4th order delivered. The Brooklyn & Queens Transit Corp. got the very first St. Louis Car Co.-built PCCs, followed by the Pittsburgh Railways and then the San Diego Electric Railway.

The new PCCs were a sensation for the time. They were able to outrun most family automobiles from a standing start and braking was equally impressive. The bright yellow LARY PCCs were a very impressive contrast when compared to the drab yellow and brown-painted standard rolling stock of the LARY. The first of the new cars went to work at once on the busy P line along West Pico Blvd. and East First Street. The lengthy J line soon got the new cars as well, and patronage on that line increased noticeably.

Eventually 165 PCCs of three types would grace the streets and boulevards of Los Angeles, delivering impressive mileage and dependability . In the end, only one car, the 3035, was lost to accident damage. The loss of LA’s PCCs in March of 1963 was Cairo’s and Chile’s gain, and Los Angeles became just another “town” with an inferior all-bus transit system.

Today, two PCCs from the San Diego Electric Railway and four from Los Angeles Railway live on at the Orange Empire Railway. 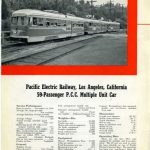 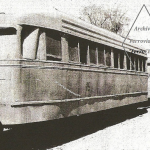