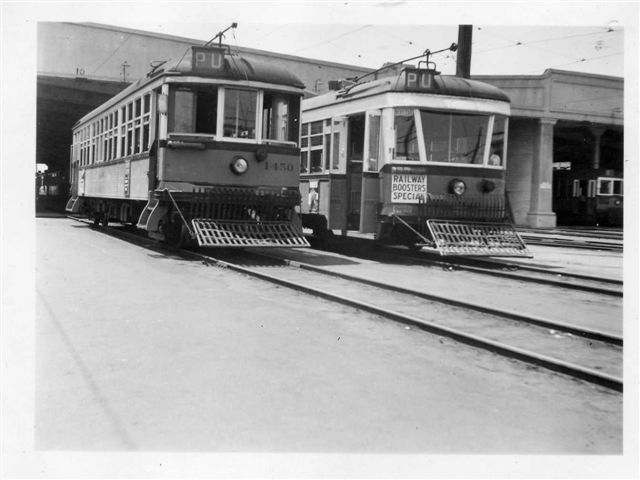 THE CHANCE MEETING: This remarkable photograph taken on July 21, 1940 during a Railroad Boosters Fan Trip can only be classified as “fantastic” from a rail fan point of view.

The location of this photo was LARY’s Division 5 car house at 54th St and 2nd Ave. The #2601 was the fan trip car on this occasion. When the 2601 and its gang of rail fans pulled into the Division 5 yard tracks, there sat the 1450 being made ready for its regular assignment on the long 5 line. The 2 cars were posed side by side for what seemed like at the time, an ordinary photograph.

By the time of this 1940 photo, 95 St. Louis Car Co. PCCs were in service and a like number of worn out “Standards” had been retired to make room for the PCCs. The trolley preservation movement was still 15 years into the future; even though about 100 Standards had been scrapped, I don’t think anyone that day gave any thought about the total demise of LARY’s vast rail system and a fleet of almost 1000 streetcars.

THE FACT: Some 20 years later these same two cars would find their way to the Orange Empire Railway Museum. Who that 1940 day could have ever guessed that these same two cars would be “car house mates” in retirement? Of all the car barns in town, the 2601 rolled into Division 5 to meet up with the 1450. Unknowing at the time to all who witnessed this scene, it would be possible for generations of rail fans to come to take a photo of these two cars (sans the fenders) in 2014. ..Long live these two special cars.