see below for update!

For the most part, both the Pacific Electric and Los Angeles Railway were very safe rail systems. The PE operated at much higher speeds than the LARY, and as a result, produced some very spectacular accidents. The majority of the accidents on the PE occurred at grade crossings where just about every class of PE rail car, from the Echo Park 100s, PCCs, Hollywood cars, on up to the Blimps, were constantly challenged at grade crossings with automobiles driven by, for the most part, MORONS!

More often than not, the results were catastrophic damage to the automobile (and sometimes to its driver. as well). The PE car usually made it home under its own power to Torrance Shops for some brief R&R and a quick return to service. Other collisions that involved two or more PE rail cars were usually more dramatic and necessitated longer says at Torrance Shops.

The LARY, on the other hand, was a system where speeds rarely exceeded 40 mph. As a result, accidents were not as spectacular. Nonetheless, the LARY accident record could and did produce some amazing results.

Such an “incident” occurred one rainy night at the intersection of 2nd Street and Broadway during World War II. In this case, 9 Line car no. 893 was turning from westbound 2nd Street to southbound Broadway. For what ever reason, 5 Line car no. 1436 slid into the right side of the 893 amidships as the 893 was completing its left-hand turn. It was a rainy night, and with the exception of the PCCs, no LARY cars were equipped with windshield wipers (something that LATL management rectified on all H- and K-class cars after 1946).

One can only speculate that as the 1436 headed south on Broadway, its motorman cranking away on the Johnson Fare box, and the front windows blurred with rain, he did not see the red STOP sign displayed by the ACME traffic signal and ran into the side of 893 with the results depicted in this photo. Notice that the lights in the 893 ore still on, while the 1436 is dark.

Because of World War II passenger demands, every car was needed. Both cars were quickly returned to service.

The most noteworthy item in this photo is the front dash sign on the 893: it displays the entire route of the 9 Line as operated at that time. It reads: 9 West 48th St (48th & Crenshaw) via E. Third St-Traction- E. Second-Broadway (Central Business District) Pico-Grand Ave.-Santa Barbara and Hoover. According to LA traction historian and “dash sign GURU” Craig Rasmussen, if one of these dash signs still exists, and could be found, it would be the “HOLY GRAIL” of LARY dash signs. For now, all we can do is look at this photo and hope that one of these dash signs could still turn up at a traction swap meet. Do you have one in your collection?? 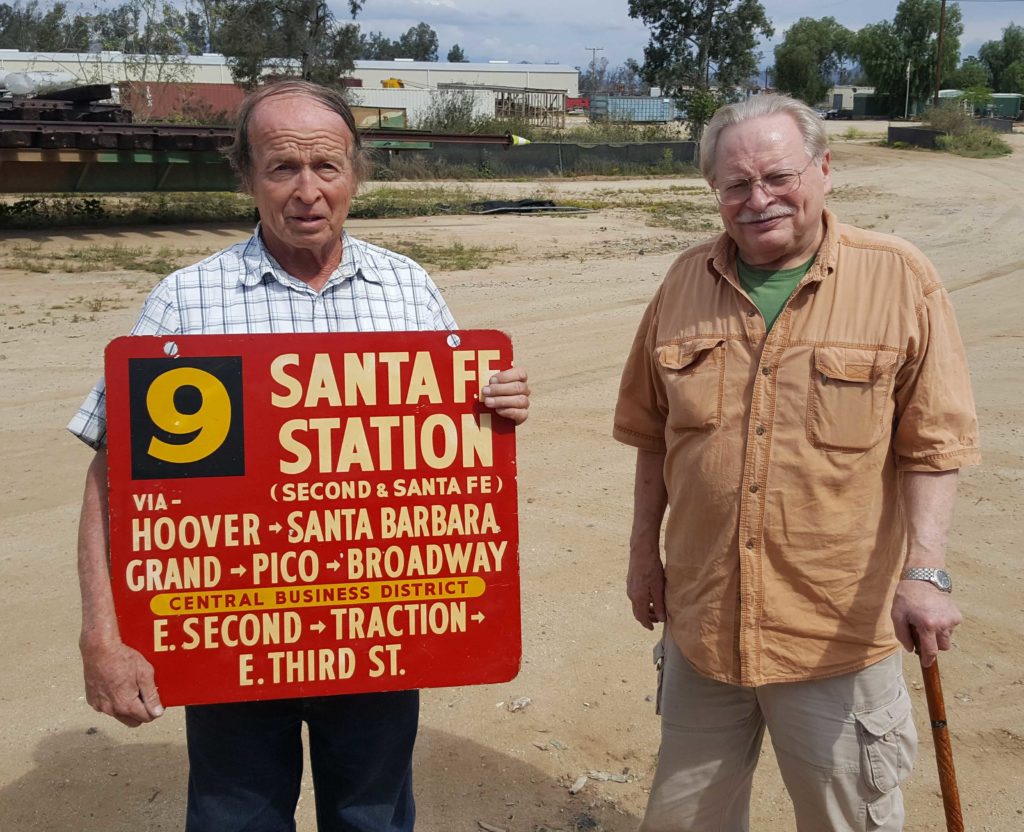 After reading Ralph Cantos’ article “LARy 893 and 1436: A Smash Hit on Broadway” I called fellow Orange Empire Railway Museum archivist Pat Ellyson to see if he had seen one of the “Holy Grail” LARy 9 Line dash signs in the OERM collection. He replied that he hadn’t but he had one in his own collection!

We arranged to meet up with another OERM archivist, Craig Rasmussen, for a photo op. Pat recalled that he had bought the dash sign years ago at a swap meet but couldn’t recall from whom.

According to Pat, in November 1936 these dash signs were introduced for the 9 Line. On September 24, 1939 the 9 Line was rerouted and the dash sign in the photo wasn’t used after that.

I’ve always wondered what a holy grail looked like. Now I know.