All that remains of the Santa Monica Air Line, 2011

This was all that remained of the once vital freight and passenger route when I made this shot for our “Pacific Electric Railway Then & Now” book. Presently the right of way seems to be occupied by a police impound yard, how ironic.

Originally surveyed and built by the Los Angeles & Independence Railroad which opened the line for business in 1875. The line was then sold to the Southern Pacific Railroad on July 4th, 1877. The Southern Pacific leased a portion of line to the Los Angeles Pacific on July 1st, 1908. This lease only included trackage that ran from the Port of Los Angeles (in Santa Monica) to Sentous, a point just west of present day La Cienega Blvd. where the La Cienega / Jefferson Metro station is now located. Los Angeles Pacific eventually fell under the control Pacific Electric Railway in the Great Merger of 1911 and the line was henceforth operated by the PE.

The Pacific Electric effectively ended passenger service on the Santa Monica Air Line in 1953 and removed the overhead wire in that same year. From this point forward, diesel locomotives assumed the responsibility handling all of the freight traffic on the line.

Presently the remaining section of the Santa Monica Air Line west of the 110 Harbor Freeway is utilized by its modern day counterpart the Expo Line, E Line or Line 806 as it is now officially named by the LACMTA.

In this now dated 2011 view we can see a LACMTA Blue Line train racing past the old location of Amoco Junction on its northward journey to downtown Los Angeles. Now in 2021, even the Blue Line car in this photo has become part history. 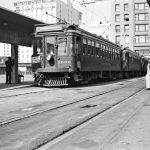 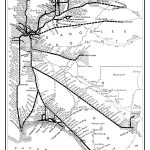