The number of people at Main Street Station in Los Angeles continued to grow in the early morning hours of April 9, 1961.

A scheduled train to Long Beach (single car barely visible on the left) was set to leave at 2:16am. A special train awaited on the track to the right for what would be a “last run” departure. This picture was taken prior to the last inbound trip from Long Beach due in at 2:55am.

According to the May 1961 MTA Emblem (the employee magazine), numerous MTA employees were on board the inbound two-car train completing a final round trip ride from Los Angeles. The Emblem noted that last inbound train then departed at 3:45am. on what normally would have been the first run to Long Beach on the Sunday schedule.

Shortly thereafter the special last train got underway to the same destination. Also according to the Emblem, the next scheduled departure to Long Beach was at 5am — by a new Dreamliner bus that had arrived 15 minutes earlier on the first run north from Long Beach.

Without missing a beat, the rail service vanished. 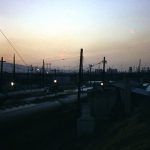