It’s later afternoon on April 7, 1961, as one of the last Limited trains to Long Beach rolls to a stop at Los Cerritos.   This stop was well-patronized during the morning and evening rush hour as many who lived in the adjacent neighborhood worked in downtown Los Angeles.    The stop not only had a covered shelter by the southbound track, but on the other side were elaborate cement steps leading up to a driveway for cars to access the car stop. Dozens of cars would be there at express train times.   Beyond was a city park.   Until the end, Los Cerritos was always one of the more pleasant stops on the system.
Stephen Dudley Photo and Collection
April 7, 1961: Los Cerritos2019-02-242019-02-24https://www.pacificelectric.org/wp-content/uploads/2018/05/peryhs-logo-350.pngPacific Electric Railway Historical Societyhttps://www.pacificelectric.org/wp-content/uploads/2019/02/one-of-last-ltd.-trains-los-cerritos-4-7-61.jpg200px200px
Recent Posts
Showing 4 comments 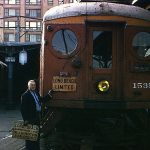 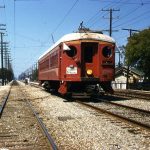