LATL no. 1327 is seen here working the H line during the last days of that line. The rail service was abandoned on August 3, 1947. Despite vigorous opposition by the Los Angeles City Council headed by Kenneth Hahn, and passengers alike, LATL abandoned the line. To make sure the rail service would not return, the tracks were pulled up before any rust could form on the still shiny rails.

LATL management told the city that nearby bus service was no more then a few blocks away from any part of the H line west of Downtown. So if the displaced H line passengers did not like the parallel bus service, they could “hoof it” …. and that was that.

Today, if you know where to look, there are still identifiable traces of the long gone right of way between Benton Way on the east and Bimini Place on the west. The most significant remnant of the H line remaining today, is the short one block long right of way at Vermont, 1st Street  and Bimini Place.

After the H line was abandoned, the short “run through” section of right-of-way was reconfigured into a loop. It would become known as “The First Street Loop.” The loop was used for rush hour V and R line  “turn backs.” In the wee hours of the night, R cars would terminate there, rather then go to 3rd and Gramercy. During construction of the Hollywood Freeway at Vermont Ave.  V line cars turned back there. The loop remained in service to the very end by the LAMTA.

First Street Loop, 1963: LAMTA no. 3156 poses for the camera in the loop while on a 1963 fan trip as the end of streetcar service in LA neared. The HUB Café  building , a fixture of the loop for decades, is slated for demolition. The owners wanted to reopen the small eatery, but the Los Angeles Department of Building and Safety has demanded a mandatory multi-million dollar earthquake retrofit be made before the eatery can re-open. This demand is far beyond the what the owners can afford, so the little eatery will be demolished later this year.  The track configuration of the loop clearly visible.

First Street Loop Today: This recent photo shows the remains of the 1st Street Loop as it looks today. The loop is now on private property and the current owners have no plans to remove or cover the rails. They are aware of the historical value of the rails.

As far as I know, this location is the VERY LAST bit of streetcar tracks to be seen in Los Angeles. There might be some visible rails at Vernon Yard, but I have not been to that location in decades, so I have no idea what, if anything , remains of the loop that was located there. If anyone out there knows of any more visible rails in LA, please feel free to leave a comment.. 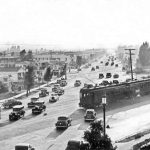 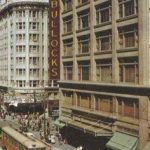