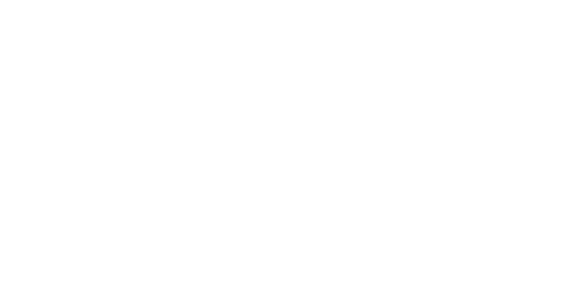 LARY’s L line was one of the first major car lines to be abandoned in favor of “motor coach” operation in the early months of 1940. West of Hoover St, the L line traversed W.10th St. At Crenshaw Blvd. The line zigged and zagged down Victoria Ave, Country Club Drive and back to Olympic, to the end of the line across  the street from LA High School.

In honor of the 1932 Olympic Games, West 10th Street was being transformed from a narrow one and two lane street into a wide boulevard and renamed West Olympic Blvd. As the street widening progressed west in stages, the L line rails were now located on the north side of the new boulevard, causing a myriad of problems.

As the widening project neared Crenshaw Blvd. it was decided to abandon the L line in favor of the new Motor coach line #90. The new bus line was extended far beyond the L lines end near Rimpau Blvd. to Olympic and Spaulding Dr. across the street from Beverly Hills High School.  And so photos of the L line are rare, no matter what the quality.

In this photo, car no. 874 has just turned off of 11th St. onto Hoover for about 75 feet, where it will turn west on the new Olympic Blvd. All the big beautiful 2 story, turn of the century Victorian mansions are gone today, replaced by non-descript one story stores, selling all manor  of knick-knacks and what nots. As of this writing , most of the stores are boarded up and abandoned. Virtually everything in these 2 photos are gone today. 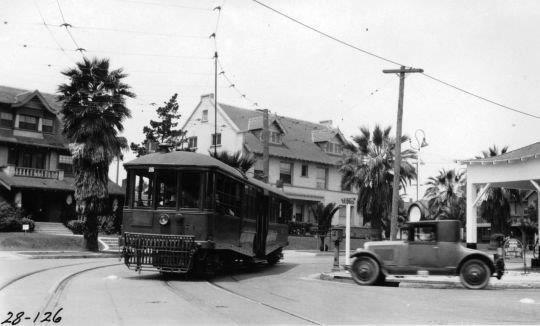 L line car #871 is seen  here turning off of 11th St. onto Hoover St. in this 1938 photo. The view looks north-west.  The quality of this photo could be better, but the subject matter is unreplaceable. The big mansions that lined both sides of Hoover St in this area are long gone. Today, you would never know that this beautiful tranquil scene ever existed. 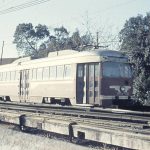 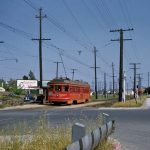