While color photographs of LA’s PCCs during their service on the LATL and LAMTA are plentiful, color photos of them in service under the LARY banner are rare. This beautiful color photo shows car no.3055 heading westt bound along 5th Street working the 3 line.

When they entered service in 1937-38, patronage on lines using them saw an instant increase. No doubt, the P line saw the largest increase in passenger loadings, a factor that held true to the very last day of service on that dreadful day in March 1963.

As PCCs go, the LARY spared just about every expense possible when ordering the cars. The St. Louis Car Co. offered a nice selection of “factory options” in their catalog, such as heaters, window shades, “no jam” window cranks, and rear markers to name some of the available options. About the only two items the LARY sprang for, were the attractive headlight wings, and “blinker” doors, front and rear.

Early PCCs that were ordered by Brooklyn, Pittsburgh, San Diego, Philadelphia and St. Louis Public Service seemed to be more fully optioned. However, these were minor details to transit-dependent Angelenos when viewing the streamlined beauties next to an 1910-vintage LARY Huntington Standard.

The PCCs served Los Angeles well. I started riding the cars almost daily in 1955 until the end of their service. I never personally experienced a mechanical failure while riding them. The well-maintained cars could have, and SHOULD HAVE, remained in service on the streets of Los Angeles for another 25 or more years. There was no logical excuse for what the LAMTA did to the transit riders of LA. It’s on par to what Metropolitan “Roach” Lines did to patrons of the Glendale-Burbank Line…. ABSOLUTELY UNFORGIVABLE. 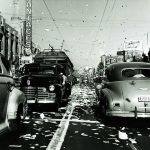