Deluxe Cars of the LARy 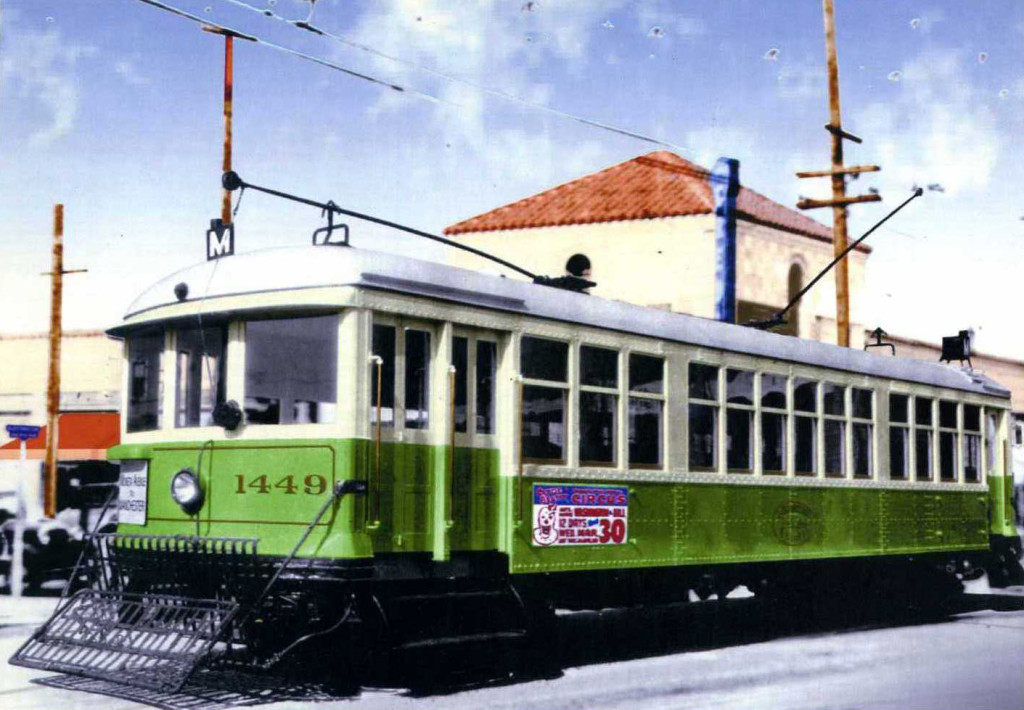 By 1929, the Los Angeles Railway was desperate for a fare increase. The PUC granted a 2-cent fare increase on the provision that the LARy improve the “Spartan accommodations” of the “interurban cars” used on the LARY E line.

Running from Eagle Rock on the north to Hawthorne on the south, the E line was almost 20 miles long. It was the longest on the LARy. Running time was almost 2 hours from end to end. The average operator could only make 2 round trips in an 8 hour day. The M line would later be changed to become the 5 line; it was a real “bladder buster”.

So to get the 2 cent fare increase, the LARY took 35 cars from the last order of H-4s, numbers 1416 to 1450, and put them through South Park Shops. When the first car, no. 1444, emerged from the rebuilding in 1929, several improvements were very apparent. The former open end sections were enclosed with brass sash windows. Interiors of the cars were given new improvements as well. The old wood slat seats were replaced with soft leather walk over seats. New interior lighting over each seat was placed in a smooth white headliner.

To make sure that the traveling public would recognized the improved DELUXE CARS, the 35 cars were given a new attractive green and cream paint scheme with gold pin striping. The car numbers were and LARy logo were also in gold paint. The roof was painted silver. The first cars to be rebuilt came out of the rebuilding with the standard slat roof mounted route sign.

Los Angeles transportation historian Wally Shilder found a short 16mm real estate promotional film from 1931 which showed DELUXE CAR no. 1449 passing the camera. No color photos of the green and cream H-3 cars were known to have been taken. So, ERHA-SC president and computer wiz John Heller took a single frame of the film and Photoshopped it with the resulting beautiful image. The green paint job lasted only about 5 years. By 1935, all the H-3s had been repainted back into the standard yellow and brown LARY paint job.